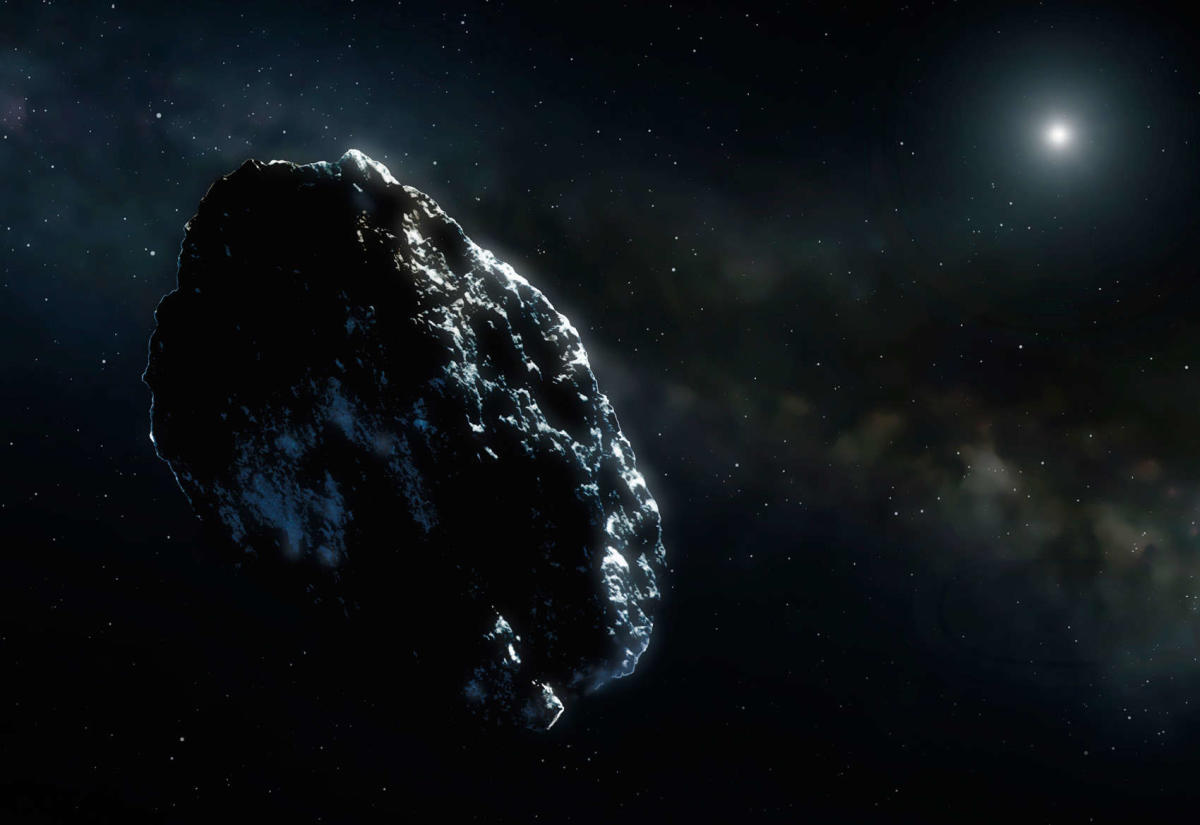 The comet 323P/SOHO was discovered in 1999, and has a fire-and-ice orbit: On its profoundly elliptical 4-year orbit around the Sun, it goes out nearly to the orbit of Jupiter, but then falls back down to just a hair over 5 million kilometers from the Sun’s broiling surface. If you were standing on the comet at that point you’d have to hold up both hands to block the Sun, and it would feel like staring down a blast furnace.

Needless to say, that’ll take something out of you. In the comet’s case, it was a couple of chunks as big as houses.

323P/SOHO was discovered in images taken by the NASA/ESA solar mission SOHO as the comet approached out star. Oddly, it’s not a very active comet, and only seems to show activity — getting brighter due to dust being ejected as it heats up — when it’s very close to the Sun. That indicates that unlike most comets, it doesn’t have a lot of ice in it. Otherwise it would start sporting a tail by the time it crossed the orbit of Mars on its way at least.

Given that 323P gets so close but has managed to survive several previous passes, when it swung around the Sun again in 2021 astronomers were ready for it. Just weeks before perihelion — closest approach to the Sun — they observed it with the huge Subaru telescope, and found nothing really amiss. At that time it was only a little bit closer to the Sun than Earth is, and showed no signs of activity, just like before.

Perihelion was on January 17, 2021, and astronomers had to wait for it to put the Sun behind it before they could point more ‘scopes at it. Then, in February and March, they used several large telescopes including CFHT, Gemini, Lowell Discovery Telescope, and Hubble to take a look [link to paper].

And it looked different.

The comet 323P/SOHO observed by Subaru before it passed the Sun (left, in the center), showing no activity, and after it passed (right) by CFHT, where it shows a long dust tail. Photo: Subaru Telescope/CFHT/Man-To Hui/David Tholen

It showed a long, narrow tail, much like what’s seen after a comet disintegrates; comets are very fragile, and when they’ve lost enough ice that holds them together they can fall apart, becoming a cloud of rubble and debris surrounded by an expanding dust cloud.

Hubble images showed two pieces had broken off, both roughly 40 meters across judging from how bright they were. Mind you, the solid part of the comet itself, called the nucleus, is somewhat less than 200 meters across, so these were significant chunks.

Given how hot the comet gets as it skims past the Sun, it’s unlikely to have any water ice left even deep in its interior, and hasn’t for a while. So why did it fall apart?

The orbit of comet 323P/SOHO is extremely elliptical, taking it out as far as Jupiter but dropping it to about 5 million kilometers from the Sun’s surface. Photo: NASA/JPL-Caltech

Taking a rapid series of observations provided a clue: The comet gets brighter and dimmer on a very short timescale, probably only a half hour. That’s likely due to its rotation. If it’s elongated, then as it spins we see its broad side and then its narrow end, so it gets brighter and dimmer. The amount it changed brightness indicates it’s about 1.4 times longer in one axis than the other, so it’s a bit-potato-shaped, as so many small solar system bodies are.

But that’s weird. A half-hour rotation would make it the fastest spinning comet known, and would have to have an unusually high tensile strength to keep from flying apart due to centrifugal force. It’s possible the forces of sunlight spun it up that rapidly, called the YORP effect.

That spin may have been why it broke up in 2021. The extreme temperature changes over just a few months as it approaches the Sun and recedes again would probably drive huge cracks in the rocky body due to thermal expansion and contraction. When it got near the Sun a couple of big cracks must have formed, and the speedy spin pulled the trigger on a pretty decent cosmic rockslide. They estimate somewhere between 0.1 – 10% of the comet’s mass was torn away.

Comet C/2019 Y4 (ATLAS) observed by Hubble on April 20, 2020 (top) and three days after (bottom). In the earlier image fragment clusters A (above) and B (below) are clearly seen, but in the later image Cluster A had substantially disintegrated further. Credit: NASA/ESA/Quanzhi Ye/Alyssa Pagan

The colors of the comet changed after perihelion, too. The nucleus reflected more red than green light after it passed the Sun — we say it got redder — but when looking at the red versus near-infrared light it didn’t change much at all. The dust ejected, however, got less red, which is also weird; dust scatters blue light and lets red through, so you’d expect the tail to be red and stay red. Nothing like this has ever been seen before (the astronomers actually wrote, “The color of the object was freakish,” which I don’t think I’ve ever seen in a science journal paper) and it’s not clear why it behaved this way .

There will be more chances to see it, since it’ll be back this way in early 2025, and perhaps see if it’s still acting oddly. But there won’t be too many more chances. Over time, the gravity of Saturn is slowly making the orbit even more elliptical and dropping it closer to the Sun. If it doesn’t disintegrate before then, it’ll almost certainly collide with the Sun in a couple of thousand years or so.

Comets that are spectacular are also by their nature ephemeral. If they’re bright it’s because they’re active, and losing material as they heat up. They can only do that for so long before falling apart or just becoming dead comets, which are more like asteroids. So any time you can see a comet, take the opportunity. It might not be back for a long time, or it might not be back at all.